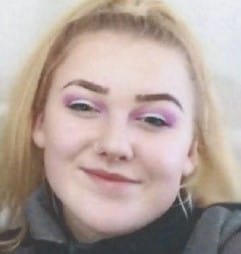 POLICE Officers are appealing for the assistance of the public in tracing a 14 year-old girl who has been missing from her home in Johnstonebridge, Dumfries and Galloway since Thursday 16 May 2019.

Ellie Fleming (14) was last seen around 7pm on Thursday 16 May 2019 in Johnstonebridge.

Ellie is described as white, 5ft 7 inches in height and of slim build with blonde hair. When she was last seen she was wearing a khaki jacket with a fur-trimmed hood, a blue Northface top, blue jeans and green Nike trainers.

Inspector Hugh McCombe said “Extensive enquiries and searches are ongoing to trace Ellie. There has been a possible sighting of her in Carlisle town centre on Saturday 18th May and we are liaising with our colleagues in Cumbria Constabulary regarding this possible sighting. She also has connections in the Barrow-in-Furness area too.

“Officers are increasingly concerned for Ellie’s safety as she is only 14 years of age we need to trace her to ensure that she is safe and well.

“I would urge anyone who has seen Ellie, or who has any information on her whereabouts to contact Lockerbie Police Office through 101 quoting reference number 4083 of 16th May.”